In our croft (summer house) I can turn on and off a couple of radiators just by sending an SMS. This is very convenient in the autumn to spring time. If we plan to visit the torp i just send an SMS some hours before our ETA, and that is all it takes to have a warm comfortable summer house to arrive to.

But I also wanted a way to measure the energy consumption in some way. From the electric meter in the barn to the torp where the logging computer is located, it is about 40 meter. And I really did not want to dig down a cable from there into the torp. Wireless would be so much more convenient.

Since I already had the Wireless Multi-sensor I figured I could reuse parts of the code and use the same PIC12F675 micro controller. I could not use the same multi-sensor since it was too crowded among the input/output pins. I had to start all over with a new device.

The electrical meter have a LED that blink 1000 times/kWh, but there are also electrical meters that blink 10,000 times/kWh. My Wireless Electrical Meter is however not dependent on the amount of blinks per kWh since the calculations is done in scripts on the receiving side (received by a tellstick or rfxtrx433) and are thus adapted there to the right blink frequency. Examples will follow later in this post.


It is however important to know that this Wireless Energy Meter is only sending the detected amount of blinks as a temperature. It does not do any calculations or generate any timestamps locally on the device itself.

The Wireless Energy Meter phototransistor (looks like a LED) need to be mounted face-to-face to the blinking LED on the electrical meter. Care should be taken so that as little light as possible is exposed to the phototransistor, as this can generate false detections.

Once mounted and powered, it will start to send the data approximately once every minute.


The Wireless Energy Meter is seen by the Tellstick DUO or Rfxtrx433 as two separate Viking temperature+humidity sensors. Both sending data synchronous once every 60 seconds (approximately).

The temperature that is sent is the amount of detected blinks divided by 10. So for example if the Wireless Energy Meter have detected 342 blinks it will send this as a temperature of 34.2°C.

Since this device is only sending raw counter data, it will be compatible with many home automation applications such as Beyond Measure, Switch King, Automagically, tellmon.net or any other solution used.

This flexibility come with a drawback. It is very much up to the user of this device to implement the code on the receiving side, to get a complete solution. I will in this blogpost share some of the algorithms and scripts that I have used.

The most interesting part of the energy reading activity is the logging. Then you can actually see the history of the energy consumption and correlate that to the inside and outside temperatures. You can also possibly detect any energy hogging device by looking at the periodicity of a peak power usage.

For this Wireless Energy Meter I first tried RRD (rrdtool). The RRD is the round robin database that is very good to use when you need to limit the size of the database. One of the drawbacks is that you need to specify at the time of creation, with what periodicity you will log your data. My sensor is sending new data once every 60 seconds ... approximately. I use the internal oscillator to clock the sleeping time of the PIC. The internal oscillator is not very accurate. The accuracy should however be within 60s +-2s. This will of course affect the accuracy of the energy calculations. The clock is also dependent on the surrounding temperature.

A better way to log the data is to use a SQL-database. Then you can save the timestamp of the data at the time of arrival, and then do calculations based on the counted pulses and time passed since last the previous package was received.

The following algorithm can be used to detect lost packages and also log to a database. See it as pseudo code,

// Callback function (If it looks similar to Telldus it is because it is based on an example from them)
void sensorEvent( int sensorId, const char *value, char *temp) {
if ( sensorId == 69 ) { //Store the secondary virtual sensor value
f_temp[sensorId] = atof( temp );
i_seqno[sensorId] = atoi( value );
return;

The formulas for total consumed Energy (Wh) and the current Power consumption (W), goes something like this,
TotalEnergi = Start_value + SUM(temp*10)/1000
The Start_value is optional and can be used when starting the measurements. You get it from the display on the electric meter. If you add this you will hopefully get the same numbers in the graphs as on the electric meter. The Start_value should be given in kWh. TotalEnergy is kWh.
SUM() is the sum of all incoming "temperatures". In C++ it would be written sumkWh += temp*10/1000;
Result in kWh.


It can also be used in Domoticz. See this thread over at temperatur.nu.
Also check in Automagically and Tellmon.net that have native support for my Wireless Energy meter.
Further more, there is also a plugin for Beyond Measure, see this thread. 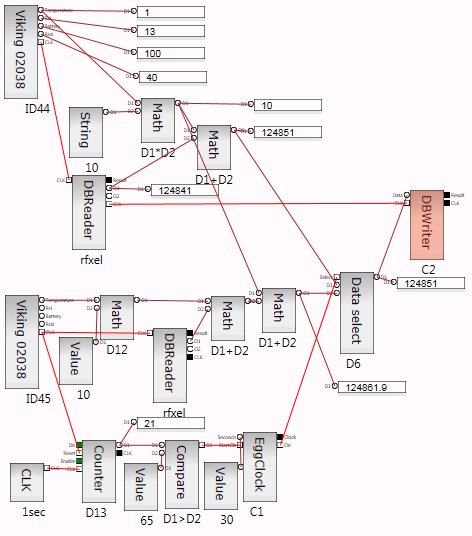 If you like it, you can also buy the Wireless Energy meter here, http://foogadgets.tictail.com